Those hideous, bloated corpses: the ideological structure of Anzac day

Imagine a parallel universe in which New Zealanders were violent, warlike and proud of their record of victory over the course of the twentieth century. Instead of focussing on the virtues of the dead New Zealanders, Anzac day in this alternate nasty New Zealand would focus on the evil of the enemies we fought. At the head of the ceremony would be a proud warrior bearing a pole, skewering the shrunken head of German soldier from Kaiser Germany. Next in line would be a preserved Nazi, which would be ceremonially spat upon and cursed by the vicious crowd. Following in the wake of these would be a curious assortment of shrunken heads: Samoan1, Korean, Malaysian2, Vietnamese, Afghani. Now imagine a curious child who asked his parents “Who are the bad guys now?”. Somewhat uncomfortably, a little unsure of themselves the parents reply “The Russians”. Then the child asks “Why do the bad guys keep changing countries?”.

In the virtuous and peaceloving warmth of contemporary modern New Zealand, we are adept at avoiding these awkward questions. We are so aghast at the nastiness and brutality of war that we do our very best to take it out of the picture entirely in our sentimentalised rituals. A recent Herald editorial title sums up this shift perfectly: “War needless, but values beyond debate are its legacy”. The two parts of the headline show how Anzac ideology functions in New Zealand today. The first part “War needless” brackets off and marginalises any sort of discussion about the historical and political nature of the deaths we are supposedly commemorating. The second part of the headline directs us to solemnly bow our heads and cease our disrespectful questions: the values are “beyond debate”.


These immortal and emotionally charged values – sacrifice, honour, courage, mateship and so on – in turn provide a basis for a sublime spirit of universal brotherhood to emerge. Again, the Herald headlines sum it up perfectly: “Anzac day brings communities together”, “Dawn salute to Anzacs brings kiwis together”. It is remarkable just how liberal and all encompassing this soft form of patriotism has become. Over the course of the twentieth century New Zealand has transformed into a fully enlightened liberal utopia. We commemorate both Maori and Pakeha soldiers, we even forgive the unfortunate cowardly soldiers who were executed for desertion3. The recent movie about Archibald Baxter demonstrates the awesome power of this liberal forgiveness: we can even forgive the pacifists and accept them into our warm embrace.


Wanting to avoid the smothering confines of this dubious love, I slept in on April the 25th and stayed inside. I read Robin Hyde's book Passport to Hell, the remarkable and subversive story of James Douglas Stark. 'Starkie' fought for the Otago regiment in the First World War, and witnessed the horrors of Gallipoli firsthand. His description of the bloated dead bodies in No Mans Land is powerfully relevant to our situation today:


But the dead who waited in No Man's Land didn't look like dead, as the men who came to them now had thought of death. From a distance of a few yards, the bodies, lying in queer huddled attitudes, appeared to have something monstrously amiss with them. Then the burying-party, white faced, realised that twenty four hours of the Gallipoli sun had caused each boy to swell enormously – until the great threatening carcases were three times the size of a man, and their skins had the bursting blackness of grapes. It was impossible to recognise features or expression in that hideously puffed and contorted blackness. 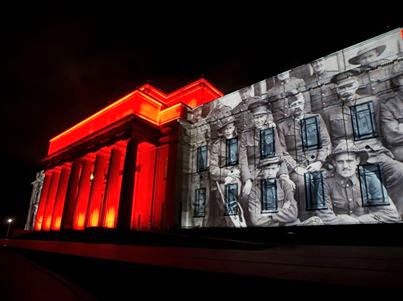 Is there not something 'monstrously amiss' with the modern complacency and sentimentality which suffuses our contemporary Anzac day? I was particularly struck by a picture printed in the Herald recently. It depicted the Auckland War Memorial museum lit up with a gigantic image of New Zealand soldiers from World War One. These images were fifty times the size of a normal man. The features were recognisable, but the unsavoury ideological connotations underlying them made them hideous. The question remains, largely unanswered: how can we bury such a gigantic corpse?


1“New Zealand was the colonial ruler of Samoa from World War One, setting up a pattern of bullying and domination that continues to this day. When Samoans, under the leadership of the Mau, demonstrated for freedom and self-determination in 1929 they were massacred by New Zealand police and troops.” Taken from this ISO article