The Deceptions of Remembrance: how does the Anzac myth frame WW1 history?

(This is an edited version of an earlier post, which was much longer and politer. As April 25th approaches I am inclined to increase the anger and outrage on this blog. Lest We Remember.)


There are two massive photographic images which border the entrance to the 'Dunedin's Great War' exhibit currently on display at the Otago Early Settler's Museum. One one side a small boy is saluting a large Union Jack flag. On the other side is the picture of a young Otago Anzac soldier dressed in a kilt. As you walk in to the exhibit you are surrounded by brightly lit photos of the faces of the young men from Otago who died during the first world war, large panels of bright red poppies and gravestones. These images are deceptively innocent, powerfully framing the way in which we are supposed to 'remember' our history of involvement with the imperialist bloodbath which took place during the years between 1914 and 1918.

There's no doubt about the staggering and immense impact and scale of the losses suffered by New Zealand during the war years. Out of a population of about one million, around 18000 New Zealanders die and 41000 are wounded. Many of the surviving veterans are physically and psychologically traumatised. New Zealanders of the time are not particularly good at talking about the gruesome emotional outcomes of the disaster, so the war leaves a massive and consequential wound. The wound hurts thousands of families around New Zealand: rich, poor, urban, rural, Maori, Pakeha.


The questions a child might ask about such a wound: was it necessary? Did any good come out of all those deaths? Can we prevent it happening again in the future? Historically these sorts of outstandingly relevant and pertinent questions have been sidelined and silenced. Instead we 'remember' the dead by the solemn and deeply emotional rituals of Anzac day. The phrase “lest we forget” is the exact opposite of a call for a critical examination of our history, it is a moralistic imperative which frames the way we view history from the outset: We must always foreground and emphasise the trauma and loss and suffering of the young men who died. This loss is almost always characterised as a 'sacrifice'. It is never clear exactly what was gained by the deaths of all those young men, but there's an implicit suggestion that they died for 'something'.


The DGW exhibit, to its credit, includes a sort of 'remembrance vine' of small paper notes, where visitors can write down their own views about Anzac day and WW1. There are three questions written onto the tables beneath, including the question 'Is the world better because of WW1?'. Although I'm really glad that this question is posed, I struggled to understand how any visitor could find anything in the exhibit to help them actually answer the question. With the faces of the dead directly looking down upon the tables, and the reverential attitude encouraged by the poppies and the gravestones, to answer 'No' would seem to imply a kind of treason.


The historical panels and artefacts are not much help either. The mannequins of Otago soldiers are distinctly non threatening, nostalgic presentations. The massive Imperial German flag is placed behind an aggressive looking Minenwerfer trench mortar gun. The dominant focus of the historical panels is military history: a detailed description of the battles fought in Gallipoli and the Western Front. 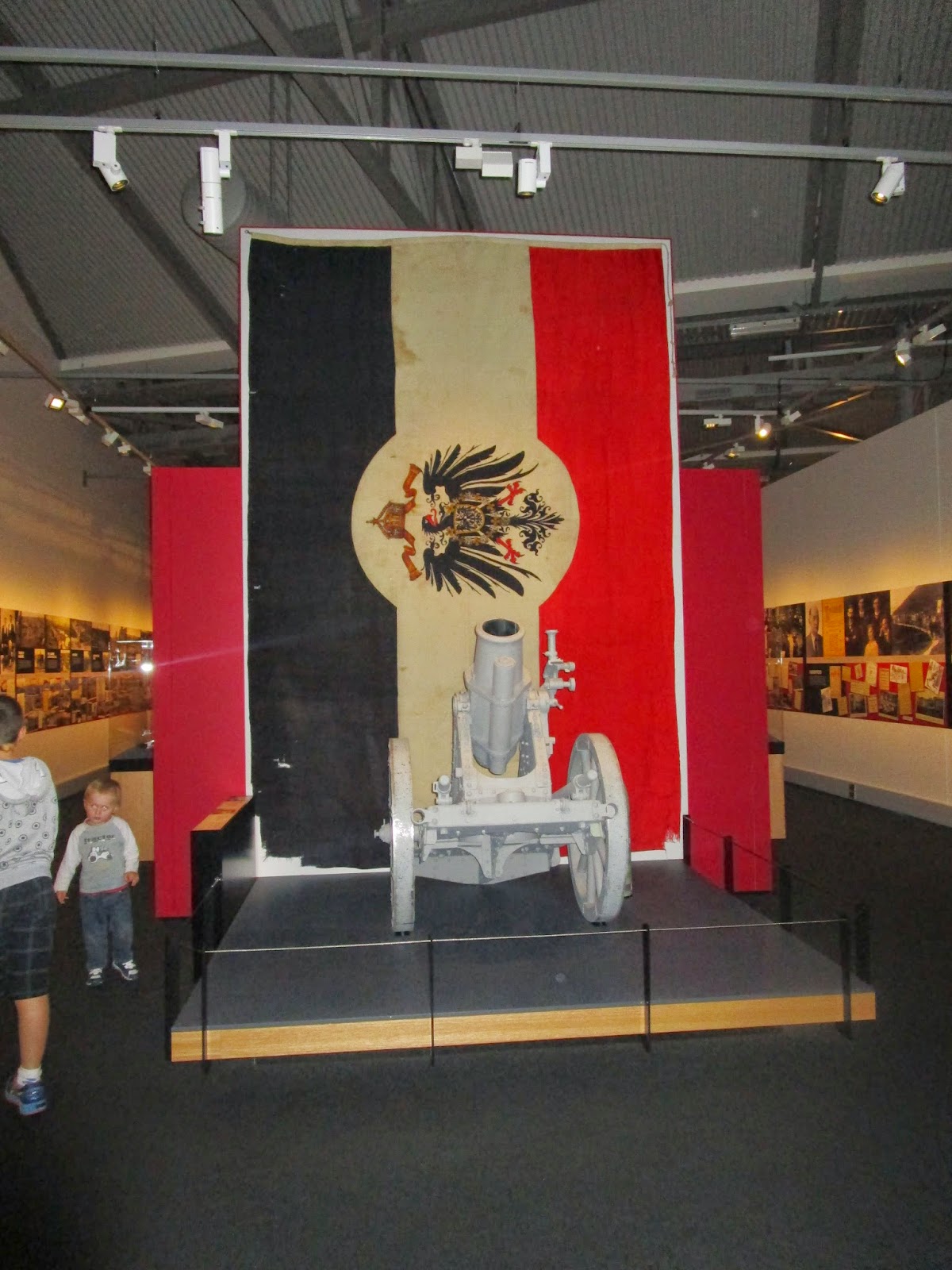 The exception to the general rule is a small section devoted to 'Dissenters'. There's a picture of Archibald Baxter, who worked on a farm in Brighton near Dunedin and wrote a powerful memoir about his experience as a conscientious objector forced into the front line trenches in 1917. Although I appreciated the biographical information about Baxter I found on the computer kiosk, and the signed copy of We Will Not Cease, I could not find anywhere an actual statement of his arguments against the war itself.


The exhibit also includes a large video screen which features a two hour documentary devoted to the Otago regiments. There are four New Zealand historians who are interviewed throughout the documentary, and in the final twenty minutes they discuss the question of the 'legacy of the Anzacs' and the broader questions about the necessity and justness of the first world war. Again there is nothing whatsoever in these comments which even comes close to critical viewpoint, but nevertheless it is interesting to note some features of their replies. Probably the most liberal and non militaristic historian, Tom Brooking, says


… we were deeply involved in it [WW1], rightly or wrongly … in a way it [the question of whether the war was just] becomes a non issue, we were there, we did our best, and on balance we came out of it pretty well.


[ …. ] it doesn't really matter what their motivations were because they were all tipped by fate into the maelstrom …


[was the war] justified? … well the origins of the war are a bit, you know, fuzzy … European culture as a whole was to blame. But, you know, it happened, our guys were there, and they did their best and that's why I think their effort should be honoured, but not glorified.


Brooking's comments sum up the way 'remembrance' frames and shapes Anzac history: the questions about whether the war was just or necessary, about whose interests it served – these questions are 'trumped' by the devotion to and celebration of “our guys”. If WW1 were a traffic accident instead of a war, this framing would be the equivalent of a close up focus on the bloody corpses of the victims. Any sort of 'zooming out' to the broader conditions of the roads, the driving conditions and so on would be sidelined and marginalised as a disrespectful sort of investigation.


Another aspect of Brooking's comments is his emphasis on the idea of 'fate'. The war is likened to a 'maelstrom', making it seem like a natural event rather than a consequence of political decisions and circumstances. This ideological take on history, as something monolithic and beyond the reach of ordinary people, is also reflected in the presentation of the patriotic images I mentioned at the beginning of this article. The New Zealand version of 'empire patriotism' is presented as a solid, more or less unchanging fact, just like the war itself. Small minorities may have opposed the war but the vast majority were firmly in favour of it.


These two aspects, the presentation of an inevitable war likened to a force of nature, and the “fact” of monolithic patriotism, work together to marginalise and effectively prohibit any sort of critical engagement with WW1 history. The corresponding emphasis on a host of 'Anzac values' such as honour, sacrifice, bravery and duty further remove “remembrance” out of the sphere of history and into the sphere of myth.


This ideological tactic allows historians such as Brooking and other mainstream commentators to present an 'anti war' version of Anzac day. The horror and pointlessness of battles such as Gallipoli is readily acknowledged, and the traditional leftist criticism that Anzac day 'glorifies war' has less and less traction. Even pacifists such as Baxter are given recognition and prominence: as long as we focus on their suffering and moral courage rather than their actual arguments, it does not really matter. The focus on military history also allows us to take a 'critical' view upon the gruesome impact of WW1: the stupid, out of touch and elitist British generals are the bad guys, the down to earth and egalitarian Anzacs are the innocent victims. These 'critical' views do absolutely nothing to the basic foundations of the ideological scaffolding of “remembrance”, in fact they encourage and facilitate a soft version of the same nationalism which was so disastrous one hundred years ago.


There's another Empire now and another set of evil bad guys. There's another war too, and another spineless and ethically retarded government, manouvering to commit our troops. A different set of ideological coordinates, a different flavour of nationalism, a different kind of war. But the same rotten imperialist structure underneath. Don't get taken in by the Anzac mythology, the emperor still has no clothes.
Posted by Tim at 17:31