How exactly are we supposed to honour the solemn Anzac imperative 'Lest We Forget'? After a century, actual living memories of the so called 'Great War' no longer exist. The thousands of dead New Zealanders and Australians who died on the slopes of Gallipoli are represented by lists of names etched onto memorials, black and white photos of young men wearing lemon squeezer hats. Newspapers run hundreds of stories about individual soldiers and how and where they died. Families are shown holding pictures of their relatives from 100 years ago, medals are proudly displayed. Thousands of people will wear red poppies and attend dawn services on April 25th in order to attempt to honour the memory of the dead.

There is a huge amount of emotion and a sense of ritual in these rites of remembrance. Even though I am deeply critical of the entire notion of 'remembrance' and its de-politicised practices in the 21st century, I still cannot deny the awesome power of the Anzac spectacle. Exactly what thoughts and memories will be stirred in the minds of people across New Zealand and Australia I cannot fully comprehend. The call to 'honour the dead' has quasi-religious overtones. For many people Anzac day is an opportunity to partake in a ceremony with a set of meanings and values not readily on offer from the secular world we now live in. The solemnity, the sense of tradition and connection to the past, the idea of a collective identity and the transcendence of the everyday world: all these are powerful elements that cannot be denied.


These potent spiritual currents have a magical effect. Just as a shaman or a priest might summon the power of the dead, so too the ghosts of Gallipoli are resurrected anew each year to cast their spells. We need to be wary of priests and shamans: sometimes they abuse the powers they have over ordinary people. In the context of modern day Anzac practices, we need to very carefully and critically think about who plays the role of priest and shaman.


With these thoughts in mind let us depart from the world of spells, rituals and abstract images of fallen soldiers. Let us try to honour the imperative 'Lest we forget' in the most literal and down to earth fashion we can. The best way I can think of is to read books written by Anzac veterans. These exist in many different formats: diaries, biographies and novels. There is a quite literal mountain of Anzac related literature which is devoted to the idea of preserving the 'memories' of the soldiers. My experience in reading some of these books has taught me that there are vast differences in the nature of the accounts given of the war and what it was like. Soldiers were of course individuals who experienced the war in a variety of ways, according to their temperament and beliefs and values. There's a very real and significant complexity here, and to choose any single text over all others is without question a political act. I will not deny my intentions here, I want to do everything in my power to encourage discomfort, suspicion and hostility towards the institutional narrative of Anzac day. The text I am going to choose is John A Lee's 1937 novel 'Civilian into Soldier'. Although the book is a work of fiction, it is very clearly based on John A Lee's experiences as a WW1 veteran. The battle described happened in June 1917 in a French town on top of Messines ridge. The main character is John Guy. The Anzac virtue I will examine is that of courage. 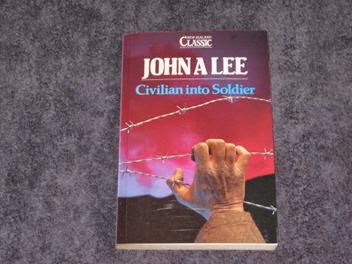 John Guy waits in the trenches for the order to go over the top. He describes the soldier next to him trembling with fear, and he can hear the sound of teeth chattering. He feels the fear too and does his best to steady and calm himself. To counter the terror of what awaits them John makes up horror stories of what awaits them and attempts to use black humour to cure the fragile nerves of himself and his comrades.


They joined him in his efforts and and competed horror against horror as they poised on the brink. He cured his own and his comrades' fear by exaggerating it and laughing at the exaggeration. As he sneered he lost his own slight tremor and lessened a little the clicking of his neighbour's teeth.


These imaginative exercises are interrupted by a nearby 'whizz bang' exploding nearby. The shock is invigorating, and John Guy adopts a pessimistic and resigned attitude to counter the fear:


But the excitement engendered by the shot soothed Guy's nerves, horror at the human grill stilled his tremblings. Placidly he resigned himself to anything the lingering remnant of night held. The machine would get everyone, and it didn't seem to matter whether one was torn to pieces in a trench, riddled in the open, or grilled like a cutlet in a red-hot stove. There was not much use fretting about one's fate. Whether men shivered or not they were ground or pulped, whether they laughed or cried.


The men in the trench whisper to each other the amount of time to go before the battle. When Guy hears the whisper 'An hour to go' his fear comes back with a vengeance. He listens again to the sound of his neighbours teeth, and gets a massive surge of adrenalin. He stops feeling tired, his equipment no longer feels so heavy, and he begins to feel excited by the thought of the battle to come. He psyches himself up into a high pitch of readiness for battle, and by the time the 'five minutes to go' whisper arrives his fear has dropped away:


He was crouching like an athlete, he was already half-fiend, blood and iron, ready to be amalgamated with blood and iron. He would ride a wave of molten metal into Messines, into the very gates of hell. He had lost all concern for his person. He was charged with dynamic exaltation. His fleshy limbs were limbs of steel, his heart was beating with the steady stroke of a mighty engine. He did not know it, but far above the ordinary man he had the power of emotional and fanatical adaptation in crisis. He was ready to embrace the devil and rollick with him in hell. He had lost all concern for his comrades, had forgotten them as he tensed himself to spring. He didn't know, he did not care if they were possessed of his divine hysteria. Some were. Some were still brittle humans too aware of their frailty.


By the time to go over actually comes, John Guy identifies himself as a part of this wave of violence directed against the Germans. He loses his fear, but he also loses his sense of connection with his comrades and his sense of humanity. When the battle finally begins he feels invincible:


Fear and horror, what were they? What the hell were they when frenzy sat in possession? He was an iron man, a giant. He was irresistible. […] he was free from all hurt and all ache, he was drunken with the killing lust, as merciless and as efficient as the barrage.


As he makes his way through the shell holes and barbed wire, Guy spots a friend of his dying. He feels no emotional response and continues on his way. As he continues he sees three German prisoners being escorted and yelling 'Kamerad!' to avoid being shot at. John Guy joins his fellow soldiers in laughing at them:


He then witnesses one of his fellow New Zealanders shoot one of the prisoners. Although he disapproves, Guy does nothing. A sense of nihilistic patriotism has turned him into a cold blooded killer:


Shooting a prisoner wasn't criminal at the moment, seemed merely a breach of good taste. What were a few Germans more or less? What the hell was anyone?


In a few months Guy might see more dispassionately if he lived that long. For the moment his eyes were red. He knew homicidal mania. He had patriotic delusions.


The bloody and violent scene continues for several pages. There is a very despairing tone which unflinchingly confronts the darkest aspects of what men become in war. There is a strong tendency for contemporary Anzac discourse to emphasise the deaths of New Zealanders above all else. It's not always very well “remembered” that our soldiers not only died, but also killed:


On the right a New Zealand company was working through the tumbled heap of masonry that had been Messines, running from concrete emplacement to concrete emplacement, shooting, bayoneting, bombing, being shot, being bayoneted, being bombed. Men with red in their eyes were running at men with fear in their eyes, the aggressor imbued with the destructive surge of the barrage, the defender weak under its bloody hammering. For men on the heels of barrage are fiends and and men being attacked are human beings. Nevertheless if men attacked with hysterical frenzy, men defended out of despair. Men in grey defended, and shot and shot until they were overwhelmed, and then died wondering why surrender at the bayonet point had noy been accepted. When men resist and kill so that their excited breath fans victors' faces, the fiends who have advanced despite toppling comrades cannot turn in an instant to apostles of meekness. The instant it took a finger to press a trigger, and arm to jab with a bayonet, a hand to release the clutch of a bomb, was not enough to metamorphize the beast into the dove, to bridge the abyss between the primeval reversion and the twentieth century human. For war is war and war is atrocity, and only the splash of blood can wash blood from the vision. In the ruins men squirted nickelled death out of barrels. What else could they do? To even run away they had to retire through the British barrage. In the ruins New Zealanders battered them down, thrust them down to death.


The battle of Messines was one of very few “victories” won by the NZEF during the course of the first world war. Just what to think of this “success” depends upon your point of view. Clearly John A Lee takes absolutely no pride in this victory, in fact there is a deep sense of shame and horror evident from the text I have quoted above. To really see the politics which still play out in these ancient trenches, it is very interesting to compare Lee's narrative with that of some modern day Anzac historians. Check out this 14 minute clip from the recent documentary 'Journey of the Otagos' which focuses on the Battle of Messines and spot the differences:

All quotes are from 'Civilian into Soldier' John A Lee, Northumberland Press Limited 1937
Posted by Tim at 17:14