Some thoughts on the 'Camp Gallipoli' saga

I knew nothing about the 'Camp Gallipoli' concept until today when I heard about it on the radio. For the price of a mere $100, New Zealanders would be entitled to the privilege of camping out under the stars in Ellerslie Racecourse, honouring the memory of the brave Anzacs by sleeping outside and being woken at dawn for a special memorial service. Local band Evermore would provide the theme tune to the event, and high profile New Zealanders such as Sir Richard Hadlee, Sir Graham Henry, Annabel Langbein and Nigel Latta were backing the event alongside the RSA.


Unfortunately for the organisers only 102 people bought tickets, and they have had to cancel the event because it is not viable. It was planned to attract between 10,000 and 20,000 people.

There was a strange quality to the discussion about why the event had failed so miserably to attract people. The headline  Low Camp Gallipoli ticket sales a 'genuine mystery' seemed quite idiotic to me, and reading the comments to the  Stuff article made it very clear why New Zealanders weren't too interested. It was seen as too expensive, and people questioned exactly what they would get out of the experience and how sleeping outside would serve to honour the Anzacs. Many also commented on the tackiness and commercialism of the venture.


There were also some quite interesting comments about the way Australians tend to 'celebrate' Anzac day with a very patriotic and often jingoistic sense of national pride. New Zealanders tend to have a mournful and solemn style when it comes to Anzac day, and the 'Camp Gallipoli' spectacle just didn't fit in with our values.


A brave minority of commentators had the audacity to suggest another reason: maybe people just aren't that interested in Anzac day. This explanation that the event failed because of apathy was also put forward by the CEO of the Camp Gallipoli Foundation, Australian Chris Fox. Clearly disgusted by the apparent lack of fervent patriotism displayed by the apathetic New Zealanders, he said “You [Kiwis] .. didn't get off your backside … laconic is an exaggeration, I'd check your pulses to make sure that you're still breathing.”


Fairly predictably, lots of people were outraged by Fox's statement, and proudly defended their commitment to a New Zealand version of remembrance.


The fact that Anzac day has seen a surge of popularity since the 1980s is often commented on. Reflecting on this story, I couldn't help wondering just how deep and widespread this resurgence really is in New Zealand. Could it be that large numbers of New Zealanders attend Anzac ceremonies mainly because of how well it is marketed to them as a duty, rather than any sort of spontaneous display of spirited pride? And that this very same marketing can fail if it isn't done properly?


My guess is that there is a fairly large apathetic majority, and then a very sizeable group of keen and genuine Anzac fanatics who have a deep commitment to the remembrance concept. Then there's a smaller group of critical people like me, who question the entire 'remembrance' concept. My sense about the New Zealanders who belong to the 'genuine Anzacs' group is that there is a fair amount of questioning and thinking about the nature of war, and that this critical spirit doesn't sit easily alongside the 'Anzac spirit' marketed by the likes of Chris Fox. Many other events, apart from Gallipoli, shape our ideas about war and identity. New Zealand has never embraced the so called 'Anzac spirit' in the same way as Australia has. So there are some quite interesting tensions and points of friction between the two remembrance traditions, and the failure of Camp Gallipoli shows up these divisions.


I spent an hour or two checking out the official Australian website of the Camp Gallipoli Foundation. There's a very interesting and revealing section with the heading “Why attend Camp Gallipoli?”. The blurb reads:


Camp Gallipoli represents the Anzac spirit of Mateship. It will bring together Australians and New Zealanders from varying backgrounds and cultures, from cities to rural areas to celebrate the Anzac tradition of equality, loyalty and friendship. It is an opportunity to take part in the Anzac centenary commemoration, the most significant commemoration to take place in our lifetime. To encourage families and school communities to come together to honour and ensure the Anzac spirit lives on. To educate and reinforce the Anzac values to our young Australians and New Zealanders.


Note the use of the word “celebrate” here, and the quasi-spiritual tone of the blurb. Also note the focus of the blurb: values, tradition and educating young people so that the Anzac spirit continues. Like I've said before, Anzac day isn't really about history or dead soldiers, it's about values which promote a very specific form of nationalism. 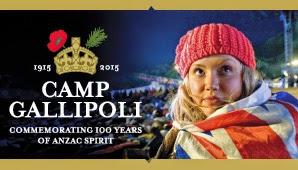 Also of interest was the list of sponsors behind the organisation. Of the fourteen big name corporates funding the Camp Gallipoli spectacle, five were media companies, including our very own TVNZ. There's also a very compelling connection with sporting bodies, and cricket in particular. A section of the website called 'Ambassadors' has a list of prominent Australians who proudly declare their commitment to Anzac values, almost all of them are sportspeople, and of these about 80% are famous cricketers. What's the connection between sports and Anzac day? Could it be there is a connection between all those celebrated values of teamwork, effort, fair play and honour which inform our Ideological Sporting Apparatus and the 'Anzac values' people like Chris Fox is so keen to promote?


Who exactly is this Chris Fox guy anyway? Well, this is his blurb from the section describing the Board of Directors:


Chris has a strong background in corporate finance and advisory services. He has advised on numerous business restructuring projects over the past 25 years including one of the country’s largest banks, health group organisations and logistics companies. He is a director of Frontier Adelaide, a full service advertising agency with national coverage across multiple media channels including TV, radio and print. Chris was also the youngest Chairman of Anglicare, Australia’s largest not-for-profit organisation. Chris is the passionate leader behind the Camp Gallipoli concept and model.


There are several other members from big business backgrounds, two former politicians and two men from military backgrounds. Seven of the nine board members are old white men. There's one Indian man who comes from a military / multinational background. A single female, Andrea Michaels, who is a tax and commercial lawyer.


In the “Shop” section of the site you can purchase tickets to the various Camp Gallipolis happening in major Australian centres, and you can also spend $275 (single size) or $375 (double size) on a special commemorative Anzac 'Swag'. If, like me, you are not exactly sure what a 'swag' consists in, the answer is it is basically a glorified pup tent. Unfortunately for devoted Anzackers, if you buy one of these poignant items you won't actually be able to use it in the camp. There's a very clear and sensible reason:


“Please note: Due to occupational health and safety, swags cannot use guy ropes or poles at the event. This is to avoid tripping hazards in the walkways which double as emergency exits. Swags may also not be erected at the events as they will hinder other attendees views of the stage.”

I don't know whether to laugh or vomit.

" In other words, the financial paperwork of an event commemorating the centenary of the Gallipoli landing might not be publicly available until after the centenary of the Gallipoli evacuation. The Foundation is budgeting for an attendance of 250 000 and costs of $20 million. The RSL and Legacy should be interested in knowing what proportion of the money raised from this effort flows to their worthy causes; so should the punters camped out under the stars."
see more here (scroll down a bit)

From WSWS:
"While Camp Gallipoli is a registered “not-for-profit” foundation, it has extensive business and media backing. Its principal partners include the Bendigo Bank, APN News & Media, TVNZ, the Aboriginal body-hire company Interact, football and cricket peak bodies, and the Jolly Swagman camping equipment company, which is producing thousands of souvenir sleeping swags."
see more here