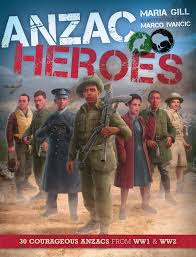 German planes bombed Reg’s ship and he made a lucky escape from the wrecked boat. When he arrived in Crete, he had only the clothes he wore and nothing else. After thousands of enemy paratroopers parachuted into Crete, Reg’s battalion was meant to replace 20th Battalion, which had counterattacked Maleme airfield, but arrived too late to succeed. They withdrew to the new frontline at Souda Bay, nicknamed 42nd Street. When a raiding party of 400 Germans stumbled into sight, the Anzacs called out a battle cry, firing as they ran, thrusting their bayonets at the enemy. The German fighters fled for their lives.

“They were highly trained Germans, but they got such a shock at our din and the way we ran that they forgot they were supermen, and ran … the whole 400 of them.”

This is a quote from page 68 of Maria Gill’s “Anzac Heroes”, and it gives you an idea how exciting this book is to read. ‘Reg’ is Reginald Saunders and there is a really realistic picture of him in uniform holding a massive machine gun over his shoulder, the same image is on the cover. We can scan the page and very easily tell exactly what medals he was awarded for his bravery. The coloured medal icons are listed in the helpful “medals” section at the back of the book. We can also tell very easily which of the five aspects of History Reginald took part in: the little tank icon means ‘Army’. (The other four aspects are Air Force, Intelligence, Medic and Navy). A helpful kangaroo icon tells us that he is Australian. Sometimes when reading ‘Anzac Heroes’ it’s a bit confusing which hero belongs to which war, WW1 or WW2. After all, the Germans were the Baddies in both wars. I figured out though that Reginald belongs to WW2, as page 68 belongs to the second half of the book. There’s a really cool map with lots of arrows on it half way through the book to show that we are moving from WW1 to WW2. There’s a boring timeline too with lots of dates and facts about which battle was which, but I preferred to skip this part and just focus on the really cool war stories.

Some really racist and sexist books about war focus just on heroic white men. Anzac Heroes doesn’t do this, it has several brown heroes (both Aboriginal and Maori) and several women. The women aren’t quite as cool as the men because they only get to be nurses or spies. The Aboriginal and Maori soldiers are really cool though, they were really brave and sometimes scared the Germans by doing Hakas and war dances. Actually, even though there were lots of racist people back in the old days, war was really good for Maori and Aboriginal soldiers. Soldiers like Reginald Saunders got lots of awards and like it says on page 69 the RSL even set up a scholarship in his name for Aboriginal people. Another example is the Maori soldier Lt Col Sir Peter Buck who proved how awesome he was in Gallipoli and then got to be second in command of the Maori Battallion and then became a famous anthropologist.

The best things I liked about ‘Anzac Heroes’ were the pictures and the really realistic war stories and how heroic the soldiers were. You get to learn all about different types of medals and lots of different battles. There are also some very helpful and in-depth sections at the back which talk about things like The Military, The Medics and a Glossary. So you can look up funny words like ‘gangrenous’, ‘panzer’ and ‘flak’. There’s even a section which explains in depth why the Anzac heroes had to fight against the Germans:

At the beginning of the 20th Century, New Zealand and Australia were part of the British Empire as self-governing Dominions. When Britain went to war, they committed themselves to defending Empire. Politicians worried that the war would spread to their shores and wanted to support the Empire’s effort to prevent that from happening.

So I think that the moral or the message of the book is that Anzac Heroes needed to fight the Germans so that they didn’t land in Australia or New Zealand and take over our countries. If it wasn’t for the brave and daring fights that they got into, we’d all probably be speaking German now and doing Nazi salutes.

But really the best thing about Anzac Heroes that stood out for me and would make me recommend it to my friends and family was the fact that it wasn’t even about politics or history it was about character and bravery. Like it says in the introduction:

“While reading about each hero you will discover what built their character, what helped and hindered them during the war, and what happened to them afterwards – if they made it home.”

So in conclusion I think Anzac Heroes is a really good book which belongs on the bookshelf of every New Zealand and Australian home. It’s got lots and lots of important facts about heaps of battles from WW1 and WW2 and also some really realistic pictures. It has a personal touch which means it isn’t boring to read and also it is very moving and emotional because of the sacrifices made by the Anzac soldiers. Lest We Forget.