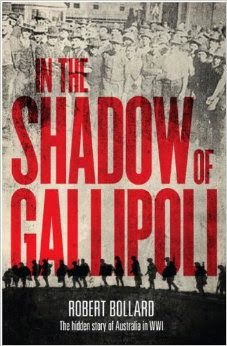 As I have pointed out before in this blog, Australia's version of Anzac commemoration is quite different from the more low key New Zealand version. The flip side of this excessive patriotism is the existence of a more extensive radical critical literature, and Bollard's book is a really important contribution to this tradition. Another curious point of comparison is the fact that Australians successfully voted against military conscription in 1916 and 1917, whereas New Zealand (despite notable opposition) introduced conscription in late 1916.


Reading this book made me want to find out more about the early history of the New Zealand labour movement and the struggle around conscription – in fact, I feel somewhat embarrassed to be writing here about an Australian book instead of something like Stefan Eldred Grigg's book The Great Wrong War. I've taken Grigg's book out of the library twice now, but with two small children it is really difficult to find time to read. Somehow I managed to finish reading Bollard's book, so now I know more about Australian history in this period than the corresponding NZ history.


Bollard claims in his introduction that the 'popular understanding of World War I is layered with multiple levels of ignorance'. Gallipoli has become a sort of quasi-mythological icon which effectively crowds out and marginalises other important WWI battles, such as Passchendale. This is a fairly ordinary sort of observation however – I seem to recall Tony Abbot making a speech with this theme in it not so long ago. More significantly, Bollard argues that the common perception of WWI as a genuine patriotic movement is a myth: 'As the casualties mounted in 1915 and 1916, many Australians began to ask why they were dying. The patriotic consensus of 1914 rapidly dissolved, and by the war's end it was, arguably, as unpopular as the Vietnam conflict would be by the early 1970s'.


The really hard core level of ignorance which Bollard points out and subsequently examines in great detail, concerns 'the full nature and extent of the radicalisation of the Australian working class between 1916 and 1919'. By placing the spotlight of historical scrutiny on Gallipoli and the war, we cast the domestic labour history of the same period into darkness. This isn't the same as downplaying or denying the massive historical impact of the deaths of thousands of Anzac soldiers in Gallipoli and other battles – rather, it's about the importance of the context and the meaning of those deaths. Nor does Bollard in any way deny the significance of patriotism. By turning the spotlight off Gallipoli, and focussing on the parallel history of struggles around issues such as conscription, we can achieve a more well balanced and nuanced understanding of patriotic nationalism. Apart from these questions relating Bollard's work to WWI, we can also just appreciate the domestic history for its own sake.


The background of this domestic history is a country which had both a very prosperous economy and a very powerful labour movement. In 1913 one third of all Australians were in unions, the highest rate of unionisation in the world. Lenin wrote about the Labour Party victory in the same year. Living standards were high, and workers had high expectations. Bollard notes that Australian Anzac soldiers were paid twice as much as their British counterparts – this surprised me, and leads me to wonder about how much the NZ soldiers were paid in relative terms.


All of this prosperity was seriously challenged during the war years, and the story of labour militancy during this period is a fascinating case study. The high point of struggle occurs in late 1917 (at least partly inspired by the Russian revolution), when a strike by Sydney railway workers sparks off a 'Great Strike' which goes nationwide. It gets defeated, but the legacy of militancy it leaves behind is really significant. Particularly interesting is the story around how returning Anzac soldiers related to this legacy: some became involved in labour struggles, often violently so (throwing scabs into the Yarra river), while others moved to the right and became involved in racist attacks (the most hideous example being the pogroms against Russians in Brisbane 1919).


The struggle around conscription was another major political event, which also casts the received 'Anzac legend' into a very different light. There were two referendums, the first in late 1916 and the second in late 1917. Both referendums were massive ideological struggles between those who supported compulsory conscription and those who opposed it. While it's important to note that anti-conscriptionists were not necessarily anti-war per se, it is fair to say that their opposition reflected a direct challenge to the orthodoxies of empire loyalty and obedient patriotism. Again, the details here about how the Anzac soldiers voted are really interesting – they were divided by the issue, and the facts about how many soldiers voted against conscription were actively suppressed by an embarassed establishment.


The third major thread of Bollard's book concerns the impact of the 1916 Easter uprising in Ireland. The large Irish population in wartime Australia was largely Catholic and largely working class. The brutal repression of the uprising seriously undermined and compromised Irish support for the war, and Irish Catholics such as Daniel Mannix became strident and influential leaders of the anti conscription campaign.


Bollard pays attention to both 'major' figures such as the Labour Prime Minister Billy Hughes and also 'minor' figures such as the members of the International Workers of the World (IWW or 'Wobblies'). Although the numbers of these far left groups were small, their influence on the labour movement and the anti conscription campaign were quite significant – their threat to the establishment was big enough to provoke the media into demonising them, and they were actively suppressed by the state. Again, the story of these activists includes complexities and contradictions which Bollard does not ignore. The most interesting story is that of militant trade unionist Tom Walsh and his wife Adela. Both of them appear in leading roles throughout the book, in both labour and anti conscription struggles. They both become founding members of the Communist Party, but end up drifting rightwards during the 1920s and metamorphising into fascists by the time of the Depression.


I'm going to finish this review by quoting the last paragraph of Bollard's conclusion, where he relates the history he has recounted to the needs of the present. Everything he says here about Australia is equally true of New Zealand:


Today, the sectarian division between Catholic and Protestant is an historical artefact. But class divisions remain – in fact they are becoming wider. The irony is that, while the militancy has gone, the reasons to be militant are returning. As the current economic and political situation in Europe reminds us, the shock of crisis can rapidly unravel any society along the faultlines of class. The suburban dream of a classless Australia – the 'workingman's paradise' of the late nineteenth century re-imagined as 'relaxed and comfortable' or as 'Australian working families' at the turn of the twenty-first – is once again in danger of being shattered. Viewed in the longer context of Australian history, the story related in this book appears much more than an interesting tale from a bygone age. The class division and political polarisation of Australia, as it emerged, scarred and battered from the shadow of World War I, appears not so much an exception to egalitarian Australia as the rule. It might be history, but it is also a premonition.
Posted by Tim at 16:06