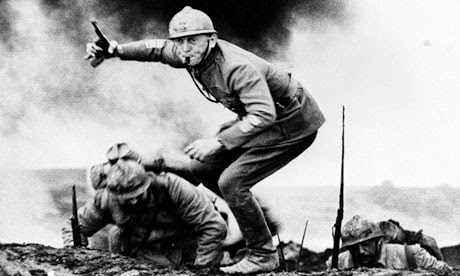 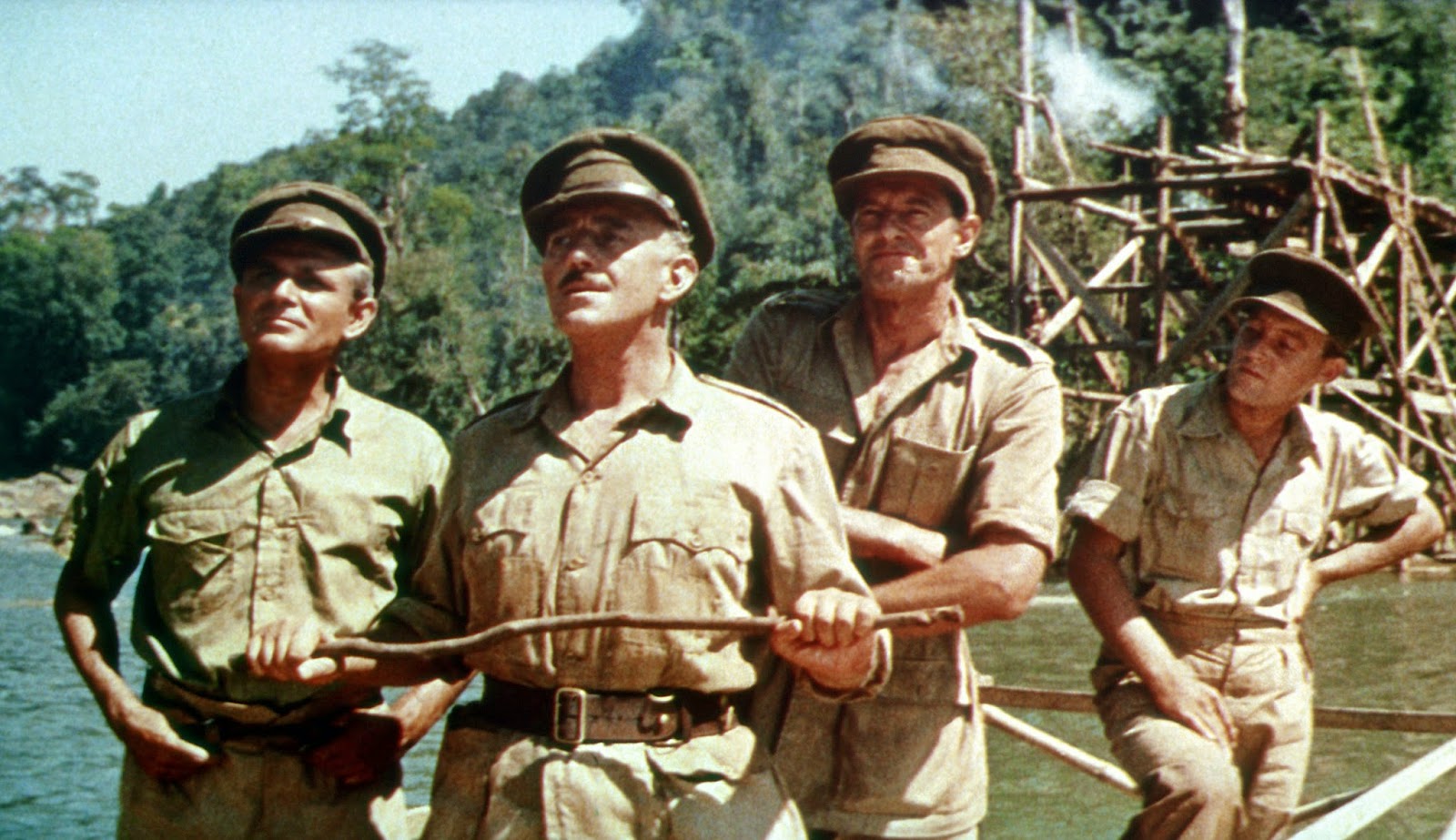 I've been thinking quite a lot about the claim I made in an earlier post that world war one is 'overshadowed' by world war two. Since writing that post, I've watched two films which I think illustrate that claim in an interesting way: The Bridge on the River Kwai, David Lean's famous movie about WW2 prisoners forced to build a bridge for the Japanese, and Paths of Glory, Stanley Kubrick's not so famous movie about French soldiers in WW1.

Both are war movies made in the year 1957, yet the differences are far more outstanding than the similarities: The Bridge on the River Kwai is a lavish multi million dollar technicolour production which goes on to win numerous academy awards. Paths of Glory is a low budget black and white affair which won critical acclaim, but made a relatively modest impact at the box office. The Bridge on the River Kwai was directed by 49 year old David Lean, an established director with a string of big movies behind him. Paths of Glory was directed by 29 year old Stanley Kubrick – no doubt a very talented young man, but still yet to establish himself as a top director. Although both movies are often described as “anti war” movies, Paths of Glory is a much more gritty, hard hitting and realistic depiction of modern war.


The depiction of class structure, and the relationships between generals, officers and ordinary soldiers is remarkably different in these two movies. Bridge on the River Kwai presents a basically harmonious image: the brave and intelligent leader Colonel Nicholson (played by Alec Guiness) is admired and respected by the ordinary soldiers. The tune of “Colonel Bogey”, better known as the song “Hitler has only got one ball”, is whistled by the men throughout the movie, and serves as a kind of symbol of the common values shared by the officers and the ordinary soldiers: honour, duty, steadfastness, courage, integrity. Having said that, it is interesting to note that the decision to have the tune whistled rather than sung was a conscious move: the lyrics were deemed to be too rude for a mainstream popular movie. Middle class politeness trumps working class humour in 1957.


At the beginning of the movie Colonel Nicholson and the other officers are locked up in oven-like cages by the spiteful Japanese Colonel Saito, who is in charge of the prison camp and the construction of the yet to built bridge over the river Kwai. They refuse to perform manual labour, and quote a provision in the Geneva Convention which specifically states that POW officers should not be required to perform manual labour. Later in the movie, Saito will regret his decision. His inadequate Japanese brain, mired in its old fashioned and irrational Orientalism, just isn't up to the sophisticated engineering feat required to build the bridge. His engineers are similarly afflicted: they put the main supports in sandy soil, which are easily swept away by the water. Luckily for them, they have some British technological experts perfectly suited for the job. Released from their confinement, Nicholson and the officers do what they do best: intellectual labour. They draw up plans, relocate the bridge, and build it with Proper British Expertise. Even though this is a form of collaboration with the enemy, they get to display a set of values which seem to be almost bursting out of the celluloid: diligence, duty, honour, integrity. Left on their own without the officers, the ordinary soldiers are undertaking petty acts of sabotage and vandalism. The slackness and purposelessness of this situation is revolting to Nicholson, who takes charge of the enterprise and eventually succeeds in building the bridge.


Meanwhile, the daredevil American hero of the movie Commander Shears (William Holden) has successfully escaped from the prison camp makes it out safely to British territory. His beachside flirtations are rudely interrupted by the British Major Warden, who wants him to join a commando unit to go back and blow up the bridge. Shears pleads to be excused, and confesses to the Major that he is not a real officer at all: he simply stole another man's uniform, and found it useful to continue the charade. He is just an ordinary soldier, surely they need a proper officer to do such a dangerous and demanding task? Major Warden tells him that they already knew his secret, but that they still want him for the job: the fact that he survived the escape and the perilous journey through the jungle to safety proves his worthiness. Social rank is not that important: it is his courage, skill and knowledge of the terrain which are the important considerations.


These episodes both indicate a sort of meritocratic conception of class. Social status reflects ability and virtue. Intellectual abilities, particularly technical – scientific skills like those required to build bridges, are the natural possession of the officers. Virtues such as courage, which allow Shears to escape and survive, are also significant. Displaying these successfully is enough for the walls of social status to fall away as easily as the badly constructed Japanese version of the bridge. If you can prove yourself through manly or intellectual feats, the gates of status will open up for you. Inherited status, aristocratic notions of rank and traditional cultures (such as the backward Japanese) are all a part of the world of the past.


There is a famous scene at the end of the movie, where Colonel Nicholson attempts to defend his bridge against the commando unit of Shears, and ends up realising the error of his decision to aid the Japanese (“What have I done!”). He looks at the dying figure of Shears in the water and gasps out “You! It was you!”, and then faints, falling on the trigger of the explosives which then blow up the bridge. Although this is can be read as a (clumsy and somewhat cheesy) symbol of the tragic futility of war, it can also be read as code for American triumph. The year 1957 is also the year just after Eisenhower has been re elected for a second term as president. The cold war is in full force, and America (rather than England or Europe) is the big superpower. Shears is the brash, reckless and hedonistic face of a new system of power. Nicholson has the intelligence and ability, but not the cutting edge attitude and cultural demeanour of the American hero.


Paths of Glory focuses on the manipulative nature of the power relations in the chain of command structure of the army. General Georges Broulard tries to convince General Mireau to launch an attack on the notoriously difficult and dangerous “Anthill”. Knowing it is nothing other than a suicide mission, Mireau refuses. Broulard slyly hints at the possibility of promotion should he comply, and Mireau quickly changes his mind. One level further down the chain of command, Mireau puts the pressure on Colonel Dax (Kirk Douglas) to lead the suicide mission. Dax has no choice but to obey, and leads his men out of the trenches into the relentless machine gun fire of the German army. Part way through the battle the French soldiers realise that they are simply being slaughtered, and that there is no chance of success, so they turn back and refuse to leave the trenches. Mireau is furious, and demands that they all be punished for cowardice. After negotiating with the chief General Broulard, a softer, yet in many ways more morally hideous plan is agreed upon: each of the three battalions will select one soldier to be the 'fall guy' who will be executed for cowardice on behalf of the others. Dax is appalled and disgusted, but gives the order to the battalion leaders to select their scapegoats. Three men are chosen, and eventually executed at the end of the movie, in one of the most chilling scenes of any war movie I have seen. Dax does his best to defend them in court, but his ethical principles are no match for the corrupt and morally bankrupt nature of the military justice system. The three men are convicted of cowardice and executed, their deaths are designed to be taken as an example by the other men.


At every level of the hierarchy, power compromises and co-opts, lies and manipulates. There is a huge gulf between the luxurious chateau where General Broulard plans his attacks and issues orders, and the cramped and muddy trenches where Dax and his men fire their guns. Yet this gulf is bridged, layer by layer, by an intricate system of 'middle management'. This onion like structure, pervaded by co-option and blackmail, was an inspiration for the creator of 'The Wire' TV series, David Simon. Although Paths of Glory superficially looks like an old black and white movie about an old war, Simon insists that its basic structure is highly relevant today:


The film template in my head -- the dramatic template were the Greek plays -- is what I regard as the most important political film of the 20th century, which is "Paths of Glory." If anyone wants to look at "Paths of Glory" and think it doesn't speak to the essential triumph of institutions over individuals and doesn't speak to the fundamental inhumanity of the 20th century and beyond, then they weren't watching the same film as the rest of us. That film is essential, and as meaningful today as the day it was made.


The story behind the making of Paths of Glory itself contains a series of deceptions and manipulations. The original scriptwriter, Jim Thompsoni, was sidelined by Kubrick in favour of another writer:


But with depressing predictability Paths of Glory soon ran into its own writing credit fiasco between Kubrick, Thompson, and famed screenwriter Calder Willingham (One-Eyed Jacks, The Graduate). Willingham later asserted that he wrote 99% of the screenplay, Kubrick wrote 2 lines, and Thompson none. This outlandish claim has been challenged by Robert Polito who looked over the different drafts of the screenplay and concluded that Thompson wrote roughly half the dialogue. In the credits, Thompson’s name would eventually be listed third.


Kirk Douglas played a significant role too: unhappy with the script as it was presented to him, with a happy ending, he handed it back. The ending was changed, but given back for approval along with the whole script from beginning to end. Kubrick was hoping that the producers would not actually bother re reading the whole thing, and he was right. The laziness of the producers and the deceptive gambit of the young Kubrick resulted in perhaps the darkest, most sombre ending of any Hollywood movie.


The penultimate scene is the execution itself. This is better watched than commented on.

The final scene is a crowded bar room full of Colonel Dax's men, drinking beer and listening to the song of a young German woman. Colonel Dax pokes his head in the door and observes the calling out and leering at the captive girl, who reluctantly sings a beautiful song which silences the rowdy soldiers. He then wanders back outside, reluctant himself to announce to the men that they will have to go back to the living hell inside the trenches very soon. Dax makes a valiant and heroic stand against the system, but it is far too huge and powerful for him to make a dent. It rolls on relentlessly, taking more and more lives as it goes.


iJim Thompson is the author of 'The Grifters' and 'The Killer Inside Me', and several other excellent crime novels. I'm a big Jim Thompson fan, so this is quite an interesting fact for me to find out. Paths of Glory does not really match the tone or nature of Thompson's crime novels, but the duplicity and double dealing of the main protagonists is resonant of a typical crime novel plot.
Posted by Tim at 00:43