Inglorious Basterds, a Donkey Bridge and an Ex Nazi

The First World War is fairly consistently overshadowed by its more spectacular and far more deadly sequel, World War Two. Although many historians and intellectuals might regard both wars as being equally momentous and consequential, I think that from the perspective of popular culture in the 21st century, WW2 wins against WW1 in terms of fame and impact by a large margin. I'm not sure what the exact statistics are, but I am quite certain that the number of Hollywood movies made about WW2 far exceeds the number made about WW1. There are some very interesting and notable movies made about WW1, such as All Quiet on the Western Front. Whatever artistic merits these films might possess, they lack a crucial ingredient: the Nazis.

A fairly reliable and seemingly inexhaustible format for a Hollywood movie goes something like this: A bunch of bad guys do some horrible things to a bunch of innocent people. Then some heroes come along and do battle with the bad guys. The good guys don't really want to use violence, but the bad guys are so bad they cannot be reasoned with, so violence is the only option. So there is a huge fight with lots of explosions and blood and guts, and at the end the good guys win. Although it's often a close call, and quite a few good guys end up dead along the way, these are usually only minor characters so it doesn't matter too much that they die. The really good looking main characters always prevail and win against the evil foes. The good looking heroes are usually smarter and better at fighting than the bad guys. It is almost as if there is some intangible substance that the good guys have, and the bad guys lack, which makes the victory of good over evil somehow necessary and inevitable.


The Nazis fit into this format perfectly. They are clearly and unambiguously evil, they kill a lot of innocent Jews, they fight a gigantic battle against the good guy Allies, and in the end they are defeated. Hitler is obviously incapable of being placated or reasoned with, violence is the only possible remedy. There is no need for scriptwriters to come up with fictional villians, the Nazis are the ultimate archetype. Hence, hundreds and hundreds of movies involving Nazis.


Inglourious Basterds, Quentin Tarantino's 2009 remake of World War Two, presents an extreme and distorted version of the standard Hollywood narrative. Brad Pitt plays the lead role of Lieutenant Aldo "The Apache" Raine, who leads a group of American Jews who go around brutally assasinating Nazis in occupied France. Just like those other red skinned underdogs, Aldo scalps his victims. Some of the Nazis he lets go, so they can tell the others about the horrors that have been inflicted on them by this notorious group of Jews out for vengeance. To make sure that they never hide their Nazi past once the war is over (Aldo is of course certain about the inevatibality of Allied victory), he carves a swastika into their foreheads before releasing them. The climax of the movie is a kind of sadistic wish fulfillment on an epic scale: Hitler and all of the top Nazis are murdered gratuitously in a cinema. The tawdry and private death of the real historical Hitler is transformed into a fictional spectacle, with nitrate film providing the highly flammable base for the final explosion.

The first time I saw this movie I'm not sure I had a strong opinion about it. Although it was nowhere near as memorable as his earlier films, and there was something I sensed to be a bit sick and twisted, I didn't think too hard about what that sick and twisted thing was. This is Tarantino we are talking about – obviously, he is determined to shock the sensibilities of ordinary every day movie goers. In terms of the famous Either/Or choice of Soren Kierkegaard, Tarantino very clearly chooses the aesthetic over the moral approach. You can't judge a stylish postmodern aesthetic by the humdrum standards of conventional morality. Besides, I genuinely did enjoy movies like Reservior Dogs, Pulp Fiction and Jackie Brown, so I felt a sense of loyalty towards his films.


After watching Inglourious Basterds for the second time however, I am quite convinced that I really don't like it, and I think I know the reasons why. This may be a completely off-the-mark analysis of the movie, and I am probably guilty of reading too much into what is basically a tongue in cheek romp with lots of cool violence. Well, I will plead guilty in advance and explain my views on this movie anyway.


Firstly, Tarantino is venturing into new territory, so it is worth pondering the differences between Basterds and the earlier films. Most of these films were set in a criminal underworld. Bank robbers, hitmen and femme fatale characters are worlds away from the righteous Jews in Basterds. We expect the criminal characters to perform acts of sadistic violence, but it is shocking to see the muscular 'Bear Jew' smash the brains out of a Nazi officer with a baseball bat. Also, whereas the criminal characters are very firmly and definitely fictional, the World War Two setting provides a much stronger connection to historical reality. This is still very clearly fiction, but in a different category.


Secondly, this film is actually quite a lot more conventional than his earlier films. Whereas Pulp Fiction experimented with a non linear narrative format, with major characters getting killed unexpectedly, Basterds follows a standard narrative arc and has a predictable ending. Aldo's gang of killer Jews are not exactly typical Hollywood good guys, but they are the unambiguous narrative focus, and they triumph over evil in the end.


Most significantly, I think that the historical context – fictionalised as it may be – completely changes the nature of the violence in the film. There is nothing much new about the violence as such, it is just what we expect in a Tarantino film – bodies writhe as they are hit with machine gun bullets, people scream as they are mutilated with a giant carving knife. But the fact that the body belongs to Hitler, and that the knife carves a swastika, provide the movie with that 'sick and twisted something' I mentioned above.


Usually with these sorts of movies, the heroes are very solid virtuous characters who take no pleasure in the violence they are forced to perform out of duty and honour. With Tarantino there is no shame whatsoever: the unquestionable moral basis of revenge against evil (killing innocent Jews etc) provides complete and total license. Milking this for all it's worth, Tarantino invites the viewer to share in the pleasure of the sadistic violence. It's OK, they are evil Nazis who deserve to die. And it's just fiction anyway.


The strange thing is that Inglourious Basterds almost acts as a sort of reductio ad absurdum of the entire moral basis of traditional Hollywood WW2 films. What is the difference between the sadistic violence of the Tarantino Jews and the sadistic violence of the Nazis? Presumably, the Jews have good reasons to be violent whereas the Nazis are just plain evil. You don't have to be an expert historian to smell a rat here: the Nazis surely had bad reasons for killing Jews, but they did without doubt have reasons. From their point of view, just like Aldo's Jews, revenge was morally required.


The most disturbing parallel is the swastika emblem carved into the foreheads of the Nazis who are released. Again, the ideological undercurrent is a sort of essentialism: there is some intangible substance within the soul of these evil Nazis, which separates them off from the world of regular humans. The swastika functions as a visible mark which allows us to identify this invisible evil substance. Now what is the difference between this and the Star of David armbands the Jews were forced to wear to identify themselves? 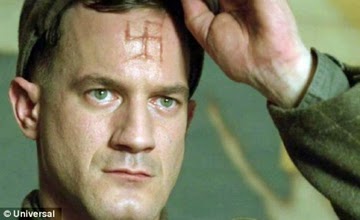 The final chapter of the movie includes numerous close-ups of Hitler's face as he watches the movie in the cinema. A Nazi sniper is in a clocktower picking off victim after victim with his rifle, while Hitler laughs and drools sadistically at the violence on the screen. Not long afterwards, we are allowed to indulge our own sadistic voyeur, and watch Hitler's face being ripped apart by bullet after bullet from the machine gun of one of the vengeful Jews. Is this supposed to be irony? Co-incidence? Is Tarantino actually providing us with a grotesque critique of our bloody sensibilities?


ANYWAY, I am guilty of using this film for my own purposes, and I have pretty much said all I need to about it now. The question I want to try to get back to is WW1, and how it gets retrospectively affected by a sort of populist understanding of WW2. There is a Finnish saying which calls out people who try to make vague or overly imaginative or obscure “leaps” from one topic of conversation to another: they are building 'donkey bridges' between the topics. I would now like to construct my own donkey bridge, leading from Tarantino's awful movie to academic history. The person who will help to build the bridge, and then walk across it, is the German historian Fritz Fischer.


The point of connection is the fact that Fischer used to be a real Nazi, who then turned away from Fascism and became famous in the 1960s as the originator of a 'revisionist' view of the origins of WW1. Up until this time most German historians either viewed Germany as being equally guilty for the war, along with the other imperial powers, or as a relatively innocent party forced into war by the aggressive geopolitical context of the pre war years. Fischer gained access to diplomatic documents previously not examined, and told a radically different story. He claim that German leaders had the war planned well in advance, and aggressively sought out pretexts for starting such a conflict: the Sarajevo assassination was a convenient episode for these warmongers. He also claimed that notions such as lebensraum were alive and kicking in Kaiser's Germany. “Fascism” was not yet a common word in European vocabulary, but the Germans could accurately be described as “proto Nazis”.


There is a crude and vulgar sort of essentialism going on in the Nazis of Tarantino's Inglourious Basterds. A kind of invisible evil essence pervades the Nazis and curses them forever to Seig Heil and kill innocent Jews. Fischer and other revisionist historians refer instead to the notion of Sonderweg or a “special German path”. This provides an explanation for fascism based upon the special characteristics of German political and cultural history prior to WW2. The Nazis were not, according to this view, an historical accident, but a very logical outcome of this historical tendency towards authoritarianism and virulent nationalism. Tarantino's Nazis are caricatures stuck in the recreated hollywood version of the 1940s, Fischer's Nazis are complex historical ghosts which can time travel back to the years before WW1.


Given the sad and intellectually bankrupt status of mainstream comment on WW1 commemorations, you probably won't see Fischer named very much in the articles. If you take a look at something like the Guardian however, versions of the “Fischer thesis” are commonly referred to. Conservative commentators routinely reference Fischer as if his “thesis” was the historical equivalent to Pythagoras' Theorem: certain, proved beyond any reasonable doubt, Germany WAS responsible for the war. We may not have known it at the time, and those proto Nazis were not quite as monstrous as the ones that came after, but we were the Good guys after all.


I'm going to wind up this post with a couple of links:the Wikipedia entry for Fritz Fischer